Are digital technology solutions the answer to all human relations issues?

While visiting a few neighbourhoods north of Johannesburg recently, I came to the conclusion that South Africa’s high crime rate has spawned a whole new industry of security solutions that are digital technology enabled, with the most sophisticated ones in full use at access points of all of the high-end gated communities.

Unitehood, a GPS-based crowdsourcing mobile app launched by a South African mobile development company in November 2013, is yet another solution meant to sound an alarm when crime is being experienced or witnessed by registered users. 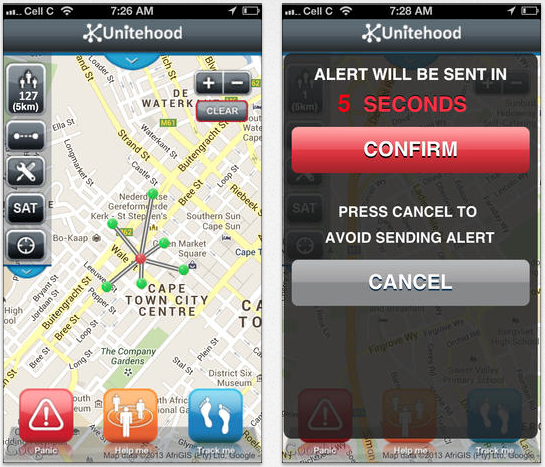 Dirk Grobbelaar, the co-founder of Unitehood, explains how this crime-busting app works as follows: “When something happens, for instance a burglary, you press the red panic button. After a 5 second countdown, it automatically sends an emergency call to the relevant emergency service you have pre-programmed, such as the police or your security company. In addition, the app sends a signal to all people who have Unitehood installed on their phone and who are in a 5 km radius of where you are.”

The Unitehood app shows great potential as a crime deterrent. Except, it requires all of the following to work effectively – a smartphone (penetration in South Africa is estimated at 20%, but growing), data (think the current high cost thereof) and reliable network signal (mainly achievable in main centres). With crime affecting everyone regardless of their economic means or location in South Africa, the Unitehood app is unfortunately not the panacea.

Coincidentally, I had a friend visiting from Kenya in early December, and he remarked how everyone kept to themselves in my gated community, and I suspect this is the case in many such environments in this city, if not this whole country. My Kenyan friend wondered how the high crime spoken about is combated when next-door neighbours hardly know one another. In turn, this made me wonder whether Unitehood will work as effectively as intended under these circumstances?

My friend informed me that the Kenyan government most recently issued a decree that a community policing initiative called Nyumba Kumi – a Swahili phrase loosely translated as “10 houses” – must be implemented to encourage groups of minimum 10 neighbours living close by to get to know one another, emphasising the two fundamental rules of security as being vigilance and looking out for one another. As can be expected, the idea is that the more people take interest in the lives of those around them, the more suspicious elements and activities can be identified, leading to taking steps to deter crime. Apparently this initiative has been implemented successfully in many countries including Tanzania, Rwanda and even Norway. Time will tell if Kenya will also get it right.

It is worth mentioning that Kenya is counted amongst the most developed digital technology markets on the continent – what with the world-renowned crowd-sourcing crisis information platform called Ushahidi, but the government saw it fit to resort to the simplest form of improving person-to-person relations. Question is, could Kenya have done a better job with a crime-busting app like Unitehood? This clearly is a rhetorical question, as “prima facie” evidence shows that digital technology solutions alone will not deter crime 🙂

ABOUT THIS BLOG | ABOUT THE BLOGGER | LATEST QUICK DIGI-TIP

One thought on “Are digital technology solutions the answer to all human relations issues?”